A photo of yourself two years ago. 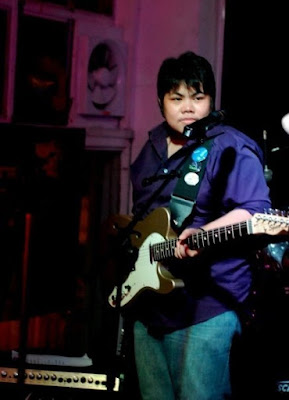 
So I just got home from sessiOnroad's last gig before Hannah goes on "maternity leave". It's already past 3AM, but I'm still high from that awesome, awesome set. I'm supposed to be getting ready for my class tomorrow later, but I thought I'd make a quick post to save face. I don't want to put too huge a gap between my entries so that challenge wouldn't go to waste.

Aaaaaand that was as far as I got before I fell asleep. LOL.

Two years ago, I was fulfilling a dream. I've always wanted to be in a band, make music and play for a crowd. I was lucky enough to have found six other people who shared my passion for music, and after years of challenges and hard work, it finally paid off in the form of a 7-track CD. We called it "No Reason" to celebrate how we got together as a band - wala lang. We were just a group of people who loved music and never really thought we could pull off something like releasing an independent album.

I still get goosebumps every time I watch videos from that night we launched our EP. The feeling you get when you hear people singing along to a song you wrote is indescribable - I wanted to cry, jump for joy, roll on the floor and laugh my ass off, hug Justin Bieber...I was in an all-time high. August 1 will have a special place in my heart forever and ever.

So what's in store for the KAZE, now that two years have passed? Gigs and events with our other band friends, usually up north. It sucks that we don't have a decent bar here in the south. We've also written more songs and recorded demos, which we will work on until the end of the year. Hopefully we get to release another CD by next year, and I can barely contain my excitement.