Your favorite photograph of your best friend. 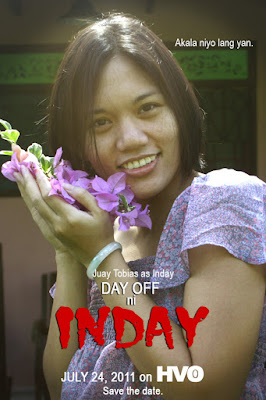 Before any of you ask, I'm going to explain the picture later. Gotta do some kind of intro first.
I don't know why, but proctoring the validating exam always leaves me drained to the core. It didn't help that my head started pounding and I started feeling nauseous an hour into the exam, and there was nobody there to take my place. I managed to get through the three-hour exam in one piece (I'm not sure if I can say the same with the students who took the exam), and I was lucky enough to find one of my students who always had medicine with him.
Anyway.
Last December, my HS girlies and I went on a grand Laguna getaway where we ate, drank, slept, and had the most competitive game of Jenga, Scrabble, and Pinoy Henyo. This photo was taken during our second day while we were checking out the grounds of Casa San Pablo. Add a little bit of Photoshop and voila! Instant movie poster! I love this pic because, well, it's funny as hell. I can so imagine her in that role - responsible and eager house help by day, con artist, drug lord, and murderer at night. Like in those slasher flicks. LOL.
Yes, this is my best friend. No, her name is not Inday (it's close, though).
I've known her since grade school. I was jumping from group to group, trying to find people who had the same interests, goals and ideas, when I met her and her group. I was a huuuuuuge fan of Sailormoon at the time, and it was nice to meet and talk to people who also loved the show. I remember us talking outside the classroom about the latest episode and speculate on what's going to happen next and other stuff. Who would've thought our friendship would grow from anime?
We've been best friends for more than a decade. We don't get to see each other that much anymore because we have to live our own lives, but we make it a point to meet at least a month for dinner or coffee and pick up where we left off. Our friendship has gone through its own ups and downs, and though we did not survive unscathed, at least we've become stronger.

And I have to go back to work now. That one-hour nap became a three-hour power nap, effectively throwing a wrench in my schedule for tonight. :|
by Keiichi at 11:45 PM
Email ThisBlogThis!Share to TwitterShare to FacebookShare to Pinterest
Labels: 30-Day Blog Challenge, Random Personal Stuff

LOL!! Of course, I have to support the blog about meeeeh. Don't forget the occasional "hanging out" where we're both actually working--just in the same vicinity. Haha!