I'm not that familiar with theater. Sure, I've seen a few plays like Beauty and the Beast, Zsazsa Zaturnnah, and Avenue Q, but those were a bit mainstream. Last Friday (Feb. 4), I got to experience something different at the preview night of Dulaang UP's "Orosman at Zafira" (thanks to Ruth Floresca and Sir Toots), and I must say I really enjoyed it. 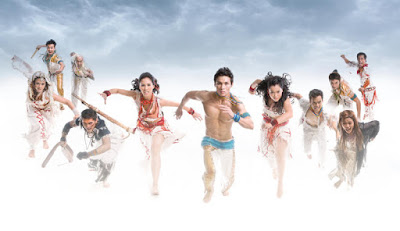 Orosman at Zafira cast
"Orosman at Zafira", a play written by Francisco Baltazar, is a story of three kingdoms locked in an endless, vicious battle which starts when Gulnara, the Marruecos' sultan's wife, is found having an affair with the sultan's adopted son Aldervesin. The events following this discovery show the darker and grittier side of love, filled with revenge, despair, hopelessness, greed and bloodshed. But amidst the chaos, the love between Orosman (the Tedenst prince) and Zafira (the Marruecos princess) shines through and gives the audience a sliver of hope that everything will be alright in the end. 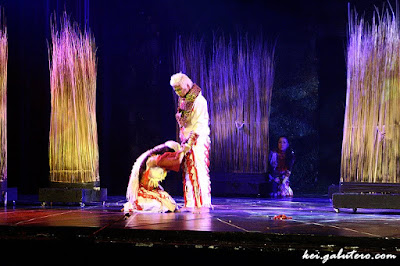 Gulnara begging Mahamud (the Marruecos sultan) for mercy, as Zafira looks on. 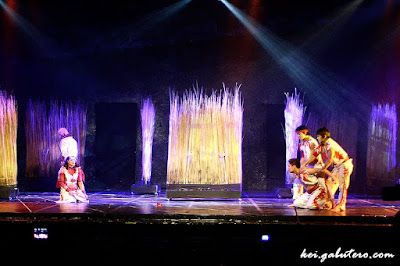 The sultan's guards restrain Aldervesin after Mahamud sentences him to death. 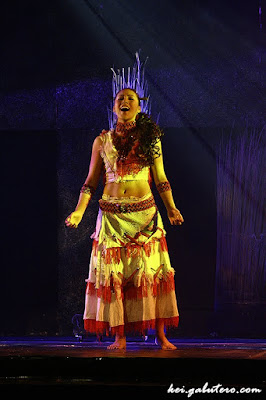 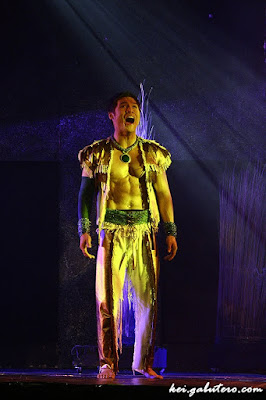 Orosman (aka Dances with Abs), played by Jay Gonzaga 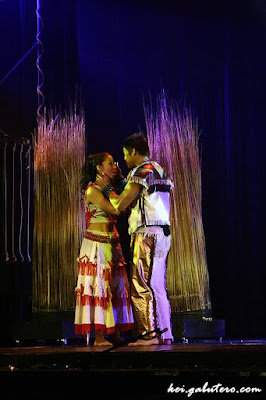 There were moments when I got a bit confused as to who the main characters of the story were. The love story between Orosman (Jay Gonzaga) and Zafira (Maita Ponce) was pushed to the sidelines and the play basically revolved around Gulnara's (Jean Judith Javier) treachery and Abdalap's (Roeder Camañag) thirst for power and his unrequited love for Zafira. It got better towards the end, though. Oh, and one thing to look out for is Tao Aves' portrayal of Zelima, the narrator. Her voice is so mesmerizing, I think I melted on my seat.

Huge props to director and choreographer Dexter M. Santos for staging such a fantastic production. The energy exuding from the cast particularly during the battle scenes was pretty intense that it made watching them kind of exhausting (and I mean that in a good way). The vibrant costumes and lights were somewhat in contrast with the darkness and angsty theme of the story but I'm not complaining; I don't think I can stand watching this play with the characters wearing drab colors. Plus it made the each tribe stand out from each other. Tuxqs Rutaquio and John Neil Batalla (Production Design and Lighting Design respectively) did a wonderful job.

Of course, this play is not without its flaws. For one, it was too long; I think they could do away with some scenes that were a bit dragging. There were a couple of technical difficulties (like the microphones not working), one of the characters sang off key for the entire song, and the most obvious flaw - the heavy, nosebleed-inducing Tagalog. Okay, maybe it's not a flaw since this is probably how Baltazar wrote this, but I have to admit that I had a hard time understanding the dialogue and some of the songs and I would've been left behind if I hadn't read the synopsis. The only words I could understand were "kasuklam-suklam ang pag-ibig", "pugot", and "mahal."

All in all, I think "Orosman at Zafira" is one of the most spectacular productions I've seen so far. If you're a fan of Baltazar, theater, or pretty lights and dancing guys with incredible abs, then go watch this.

"Orosman at Zafira" will be shown at the Centerstage Theater, 2/F SM Mall of Asia, Pasay City, Manila, Philippines on the following dates:

Tickets are sold at Php400 to Php1000.
by Keiichi at 4:20 AM
Email ThisBlogThis!Share to TwitterShare to FacebookShare to Pinterest
Labels: Theater Stuff

Hehe, thanks Ruth! See you Friday!