I was browsing through Inquirer.net when I stumbled upon the news that Vicente Romano III has resigned from his post as the Department of Tourism undersecretary. To be honest, I kind of expected this to happen after the controversy that is "Pilipinas Kay Ganda."

"Pilipinas Kay Ganda" (for those who are not aware) is the new DoT slogan, replacing the 8-year "WOW Philippines" program by the ex-DoT Secretary Dick Gordon. It is supposed to highlight not just the beauty of the Philippines, but also that of its people and culture. Now, I'm not a PR or advertising expert, but a number of warning bells went off in my head the first time I saw this campaign.

First, it's in Tagalog. I've been around PR experts and advertisers long enough to know that if a tag line can't catch a person's attention at first glance, then it's never going to catch their attention. The problem with this promotion line is that foreigners (a.k.a. the target audience) don't know squat about what "kay ganda" means. How can it compete against "Malaysia, Truly Asia", or "Incredible India", or "Infinitely Seoul"?

Next, the logo. A colleague told me about how the logo was plagiarized from Poland, and lo and behold. Check out the P, A, and the S, plus the waves and the tree concept. 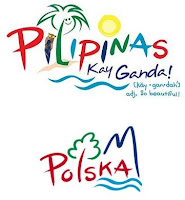 The big question: Now that Romano has resigned, will DoT still use this campaign with it's string of issues? WOW Philippines may be old (and a part of the GMA era), but it works. I wish they just stuck with it.
by Keiichi at 7:07 PM
Email ThisBlogThis!Share to TwitterShare to FacebookShare to Pinterest
Labels: Random Personal Stuff