A Game of Thrones: Musings

I just finished re-reading the last few chapters of George R.R. Martin's "A Game of Thrones." Back when I declared this book as "read" over at my Goodreads account, I must confess that I just skimmed through the last parts because I figured I wouldn't miss much since I watched the series. I have never been so wrong. :)) 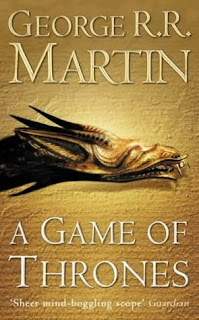 I was absolutely amazed by how much imagery the book had as I plowed through the last chapters. Even the smallest of details, like a twig snapping or a sword dropping to the floor or Summer licking his wounds after fighting with Shaggydog, added to the overall intensity or subtlety of a certain situation. It made me feel like I was there - a tree, a wolf, a brick on the wall, a Gold Cloak, a Dothraki, a servant...you name it. I was there, and I was everywhere.

The characterizations are also somewhat different. In the book, Cersei is colder and more evil, Catelyn has a personality of a rock (I can't seem to sympathize with her here than in the TV series), and Tywin has a stronger aura of authority that it actually scares me.

I am not saying that the HBO series sucks. I've been following it religiously for the past two seasons, and now that it's on its third, I am quite excited to see what will happen. I'm also curious to see the changes they've made to the story. This is, after all, an adaptation - you can't expect them to follow everything to the letter. There were parts in the TV series that were not in the book; they added those maybe just to make things more interesting and exciting.


Though the HBO adaptation provides excellent visuals, they're nothing compared to what I see in my head. Why? Because it's in my head, and it's mine and mine alone. :)

Speaking of Game of Thrones, I think the 3rd episode's out. Must. Watch. Now.
by Keiichi at 11:41 PM
Email ThisBlogThis!Share to TwitterShare to FacebookShare to Pinterest
Labels: Book Stuff, TV Stuff